In this article, we review the new book by Dave Sterrett, Why Trust Jesus, an very relevant apologetics book centered on some of the most common questions that are being asked today by both believers and non-believers.

We first disclose that we were given a copy of the book by the author in exchange for this review; however there was no discussion or suggestions made regarding the content of the review.  The only request received by the author was that we read the book and give it an honest review.

We next introduce the author, Dave Sterrett, a young but experienced theologian and apologist.  Dave is a minister, educator (taught Bible, philosophy and ethics at Prestonwood Christian Academy in Plano, Texas), youth leader and a popular speaker at conferences, schools and churches.  He is a graduate of Oak Hill Academy, Liberty University, and Southern Evangelical Seminary and is currently pursuing his second Master’s degree at the University of Dallas.

Dave is an adjunct philosophy professor at Liberty University, a part time missionary, frequent radio guest, and speaker for I am Second and Probe Ministries.  He has ministered to a variety of audiences with Christian apologists Josh McDowell and Kerby Anderson.  He is the author or coauthor of six books , including The Coffee House Chronicles series and "O" God, A Dialogue on Truth and Oprah's Spirituality (with Josh McDowell).

From the Publisher and Foreword by Norman Geisler:

The last decade has shaken our trust in personal safety through terrorist attacks, school shootings, economic turmoil, and war. Our trust has been shattered in other areas as we have seen hypocrisy in governmental leaders as well as in the church. We are looking for relationships that are authentic and full of life, but we have many questions in regard to faith, reason, suffering and even the person of Jesus himself.

This short book (about 165 pages) was written to examine and answer many of the most common questions, doubts and fears expressed by both Christians and non-believers.  In addressing these difficulties, Dave avoids both a “just have blind faith” approach that is inconsistent with Scripture, and one-size-fits-all answers.  Instead, he thoughtfully considers each challenging objection and offers clear and relevant responses to these questions.  Each question takes the form of “Why should I trust Jesus …?”  To name a few, Why should I trust Jesus when there are so many other spiritual paths, when I not sure that God is real, when I’ve been let down so many times, when life is going great or in the midst of suffering and death, when I failed so many times, and several other common questions that almost of us have asked at one time or another.

Although the book is built around these common questions, the scope is actually much further reaching.  In examining these uncertainties and doubts, Dave blends an assortment of classic apologetic arguments, sample conversations, and personal antidotes that make for a very engaging reading experience.  While the book is not meant to be an exhaustive account of the various apologetic arguments, Dave provides clear and concise descriptions that will equip the reader to be able to apply these principles to other questions that sometimes occur in a wide variety of situations.  The reader can also consult the many bibliographical references for additional information on a specific issue.

The Book and Chapters 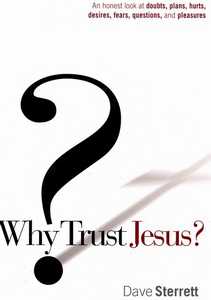 When picking up a book by an author whose other works I’ve not read, I first look at the endorsements to determine his associations and probable influences.  Dave’s book is endorsed by many whom I highly respect, such as Jack Graham, Norman Geisler, Josh McDowell, Kerby Anderson, Elmer Townes (co-founder of Liberty University with Jerry Falwell), David McKinley (former education pastor at Prestonwood), Gary Habermas and several others.  Next, I glance through the notes/bibliography, where I found Dave drew from many solid sources.  I generally prefer an index, but since the book was so concise and well arranged, this was not an issue.  Almost all the classic arguments were located within the chapter that a reader would expect that they would be found.

I also noticed the vast references to Bible Scriptures.  Many apologetic works draw primarily or exclusively from secular sources.  Dave realizes that the Bible has ultimate objective authority over all people, but he also recognizes that the Bible possesses no subjective authority over non-believers.  Thus, he maintains a great balance in his sources, using logic to reason from Scripture, history, philosophy, science, and personal experience.  It is also evangelical and even devotional at times.

We now offer a brief chapter by chapter summary, beginning with the introduction, “The Need for Transparent Trust”, in which Dave lays out the attributes or qualities that a person must have to gain one’s trust, and notes that all of these traits are perfected only in Jesus.

In chapter 1, Dave examines many other spiritual paths as opposed to Christianity. He covers such postmodern subjects as inclusivism vs exclusivism, and pluralism (including the Oprah influence). He also touches on some laws of logic, and demonstrates how to answer those who deny absolute truth and argue for tolerance of all things.

Chapter 2, along with the introduction and chapter 6, probably forms the foundation for the book’s contention.  In this chapter, Dave examines the arguments for the existence of a Supernatural God.  He begins with the testimony of former atheist CS Lewis, and then rebuts the skepticism of philosopher David Hume.  Dave then defends the existence of God, miracles and the creation (vs evolution) based upon arguments from design, cosmology (first cause) and morality.

In chapter 3, Dave advises those who have been let down so many times to continue to trust the promises of God.  He tackles this poignant subject by explaining that God has defeated evil, and will eventually destroy evil, thus we can look to the future with hope and assurance.

I believe most of us will be able to identify with the topic of chapter 4, trusting Jesus when it appears that we are doing just fine without him.  Indeed, we tend to ignore Jesus during the easy times, and then call on him when times get tough.  Dave however, demonstrates from the lives of St Augustine, Moses and Solomon that material fortunes are fleeting and that only Jesus can offer true riches.

In chapter 5, Dave reveals the fallacy of those who attempt to trust in themselves rather than trusting in Jesus.  This view is prevalent in the new age movement that is based upon Pantheism, the belief that all creation, including humans, is God.  Many other religions, including Hinduism, Buddhism, and Oprahism (to coin a new word) adopt this viewpoint.  Dave also advocates a proper balance of spiritualism and truth while giving several reasons for trusting Jesus instead of ourselves.

Chapter 6 focuses on the identity of the real Jesus.  Just as we must know who God really is (see chapter 2), we also must know the real Jesus in order to trust and rely on Him.  In the past century or so, there has been an attempt by certain critics to separate the Jesus of the Bible (the Jesus of the Christian Faith) from the historical Jesus, even though they are one and the same.  The primary evidence behind these allegations stems from the discovery of a number of Gnostic gospels near Cairo, Egypt in 1945.  In evaluating these recent claims, Dave gives many examples of erroneous statements in the Gnostics, which were written a century or two later than the four Biblical Gospels.  These false gospels were used in Dan Brown’s The DaVinci Code even though they were universally rejected by the early church.  He then demonstrates the historicity of the Jesus of Faith as recorded in the Biblical Gospels, the NT, prophecies from the OT, the Dead Sea Scrolls, and in historical and secular writings.

In the first chapter, Dave compares Christianity with other religions.  Here in chapter 7, he contrasts Jesus with other spiritual leaders.  He demonstrates that, while other leaders such as Mohammed and Buddha claimed to be the true prophet and thought they formulated the best method of getting to heaven, Jesus being God Himself was the way.  This chapter also features interesting statements from Bono on Jesus as the Son of God.

Perhaps one of the biggest obstacles to trusting Jesus is due to fact that there is so much suffering and death in the world.  Dave has already dealt with the logical problem of evil in chapter 3.  Thus in chapter 8, he discusses the highly emotional aspect of this objection.  Dave encourages his readers to continue to love and trust God even when we don’t fully understand the big picture.  He sets forward evidence for the resurrection of Christ and how this event can get us through the most difficult of times.  This exhortation is punctuated by the tender story of Gary Habermas coping with the loss of his wife Debbie to cancer.

Chapter 9 is written primary for non-Christians, but also has some applications for Christians.  Dave discusses why we should trust Jesus even when we’ve failed so often before by giving examples of historical figures that have failed miserably, but ultimately succeeded.  In an upbeat style, he informs the reader how to respond to failure by recognizing and appreciating the free grace of God.  The book ends on an evangelistic note, detailing how we can receive God’s greatest gift of forgiveness, even after we fail.

A short Afterword by Josh McDowell describes his personal struggles with trust, and how his relationship with his earthly father was radically changed by the power of Jesus.

We recommend this book for all levels of readers, both believers and non-believers.  I believe the primary benefactors will be the doubters who are honestly searching for the truth about Christianity, and the newer Christians who needs answers to the difficult questions in order to strengthen their faith and be equipped to discuss these issues with others.

The more experienced apologist can also obtain much benefit from Dave’s book.  In addition to it being a great review and concise reference, the integrated personal stories and other examples helped me to think of several additional applications for these familiar classic arguments.

Why Trust Jesus is also ideal for Sunday School or Bible study classes.  Each chapter can easily be covered in one session.  We believe that this book deserves a wide audience and will profit anyone who reads it.

Dave’s books may be purchased at the Dave Sterrett Amazon Page and other fine bookstores.